This week, Nelson Mandela, affectionately referred to by his clan or family name, Madiba, would have turned 100. The legacy of this iconic leader lives on in the hearts of a nation and a global community who find inspiration and hope from the way he lived his life and led his country. To celebrate his 100th birthday we reflect on just a few of the things he taught us about leadership and change.

When you find a cause worth fighting for you become passionate and passion fuels the fires of perseverance. Opposed to the policies of his country’s white minority government, Madiba led a non-violent action against apartheid in South Africa. It was a choice that landed him in prison for 27 years. He emerged from incarceration and became South Africa’s first ever black president. It was the first time Mandela himself was able to vote in his own country.

As with most innovators, Mandela’s road to change was paved with enormous challenges, but he never gave up the fight. His passion for the cause was bigger than the bitterness and shame of his failures. He said, “The struggle is my life. I will continue fighting for freedom until the end of my days.” If Madiba taught us anything, it was to build our lives and work around a noble cause. When you become engaged in something you deeply believe in, your energy rises and you become a magnet for people who share the same convictions. Adapt your strategies and tactics but remain faithful to the cause.

2. Expect Change To Be Messy

Business is wrought with obstacles. Innovation and change rarely follow a nice, neat linear path. Driving change often causes sacrifice, misfortune and pain. If it were easy and didn’t require tremendous backbone, everyone would be doing it, right? But just because you face difficulties and frustration doesn’t mean that what you are fighting for isn’t right.

As a partner in the only law firm in South Africa run by blacks, Mandela and Tambo, Mandela could’ve carved out a comfortable life for himself. The firm was inundated with aggravated clients seeking restitution from acts of a government that was politically, economically, and legally against non-whites.

Solving a problem that really matters, change that is truly worthwhile is hard to come by. It requires nerve to push through the trials and ultimately make your vision a reality. This is why many change efforts that fail can be traced back to a “failure of nerve.” 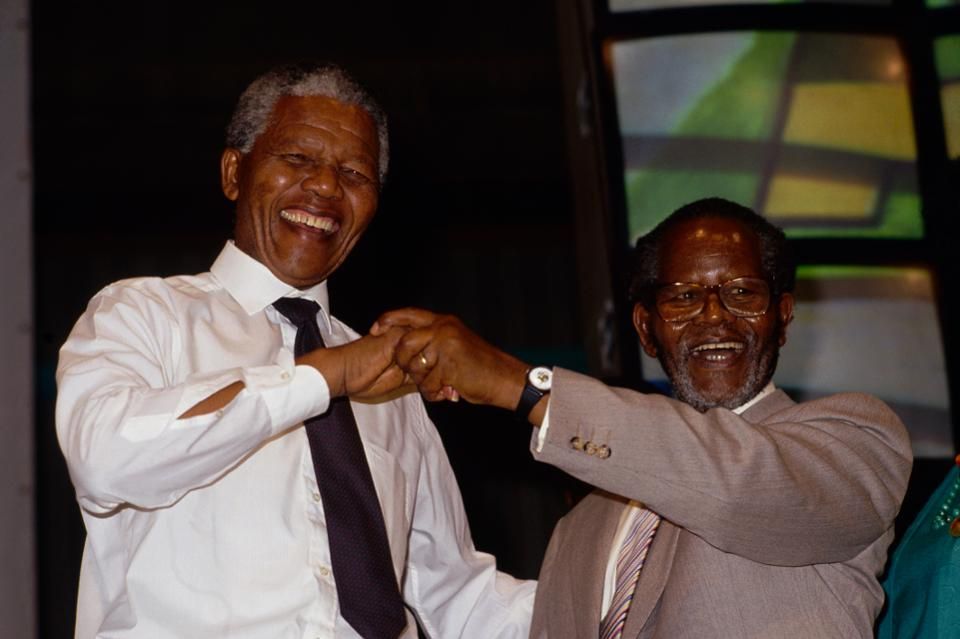 3. Forgiveness Is Key To Focusing Forward

When he was president of the United States, Bill Clinton had a conversation with Nelson Mandela when he was president of South Africa. Years earlier, Clinton woke his family up at three o’clock in the morning to watch the press coverage of the historic day Mandela was released from prison. As the television cameras pressed in, Clinton observed the sheer anger and hatred on Mandela’s face as he walked from his cellblock to the front of the prison. Then in a heartbeat, Mandela’s rage seemed to vanish. When Clinton asked the South African president about it, Mandela replied,

I’m surprised that you saw that, and I regret that the cameras caught my anger. Yes, you are right. When I was in prison the son of a guard started a Bible study and I attended. That day when I stepped out of prison and looked at the people observing, a flush of anger hit me with the thought that they had robbed me of 27 years. Then the Spirit of Jesus said to me, ‘Nelson, while you were in prison you were free, now that you are free don’t become a prisoner.’

Nelson Mandela’s emotions naturally gravitated toward anger and resentment. Whose wouldn’t? Until he recognized what was happening. Then, he made a different choice. Obviously, we are not totally free from conditions—tsunamis happen, leadership changes, employees are laid off, friends fall ill, and people die—but we are totally free to take a stand in lieu of them. Mandela didn’t “choose” to live in a world full of racism, but he was able to choose how he would respond to that world. He said, “We don’t have to be victims of our past, that we can let go of our bitterness, and that all of us can achieve greatness.”

Madiba taught us that at some time in our lives we are all victims of something, but we get to choose whether or not we will be victimized. No child is born to discriminate. We learn to hate. And, if we learn to hate people based on their gender, political affiliation or the color of their skin, we can also learn to love, even in the direst of circumstances. If you doubt this, check out South Africa’s Truth and Reconciliation Commission. It is a wonderful example of the healing power of love.

4. End Right vs. Being Right

In marriage, in social justice and certainly in business, you can focus your energy on being right or ending right. The former is often about ego and focuses on the past. The latter is future-oriented and focuses on what you are ultimately trying to achieve.

Strong-willed and determined, Nelson Mandela never cowered. He vehemently fought for what he believed in, but he was also humble and kind. “You mustn’t compromise your principles, but you mustn’t humiliate the opposition,” he said. “No one is more dangerous than one who is humiliated.” Madiba understood that you can’t make peace with your enemy if you aren’t willing to work with them and treat them with dignity. Here, he taught us about the power of collaboration and compromise:

A good leader can engage in a debate frankly and thoroughly, knowing that at the end he and the other side must be closer, and thus emerge stronger. You don’t have that idea when you are arrogant, superficial and uninformed.

Whether it is an employee, customer or partner, when you engage in a debate is your motive to become closer? To have both sides emerge stronger? Or, to win the argument?

Imprisoned for 27 years and then vindicated. Who could endure that kind of oppression and not feel some desire for revenge? Yet, Madiba reached across enemy lines and extended a hand because ending right was more important than being right. By inviting his captors to work with him to bring about positiv e change he demonstrated an incredible level of integrity for the cause and a remarkable capacity to forgive.

In 1993, Nelson Mandela was jointly awarded the Nobel Peace Prize with his former adversary, president FW de Klerk, South Africa’s last apartheid leader. The two leaders were a symbol of collaboration and compromise for bringing a peaceful termination to apartheid and for laying the foundation for a new democratic South Africa. Mandela captured the essence of what happened this way:

The efforts of a small dedicated group of leaders working objectively and without any vested personal interest in the outcome, can help resolve what often seem like intractable problems.

To be successful in business, politics or relationships of any kind requires the ability to give and take where all sides gain more. Madiba poignantly reminded us, the world can be a better place, but only if we work together to make it one.

5. Change Begins From The Inside-out

If there was a silver lining to his years of imprisonment, Madiba said it was to look in the mirror and create within himself that which he most wanted for South Africa: peace, reconciliation, equality, harmony and freedom. Perhaps his most profound impact and greatest legacy was to teach us, through vivid, living, personal example, to be human before anything else.

Self-awareness is a sign of great leadership. Madiba understood that if he was going to lead his nation out of racial discrimination and into a peaceful democracy he would have to “be the change.”

Madiba understood that this difference starts with who we are and how we land on others as leaders. His joyful and infectious character sparked hope for millions of people who want to dream big and pursue their dreams without oppressive limitations, who want to live in a world of tolerance, inclusion and hope.

What constitutes a life of meaning and significance? How do we know that we have really lived? For what will we be remembered? Aren’t these the questions we are all asking? Here’s how Madiba saw it:

What counts in life is not the mere fact that we have lived. It is what difference we have made to the lives of others that will determine the significance of the life we lead.

Great leadership is generative. That is, it is concerned about the care and growth of future generations, helping them live with dignity and raising them to new levels of morality and motivation.

Since its founding 10 years ago, The Elders have responded to Mandela’s mandate. Bolstering peace, responding to humanitarian crises, promoting climate change and nuclear disarmament, eliminating child marriage, upholding equal rights for women, reuniting divided communities and advancing the democratization of countries around the globe, The Elders have pooled their influence to make the world better and Madiba’s legacy lives on. 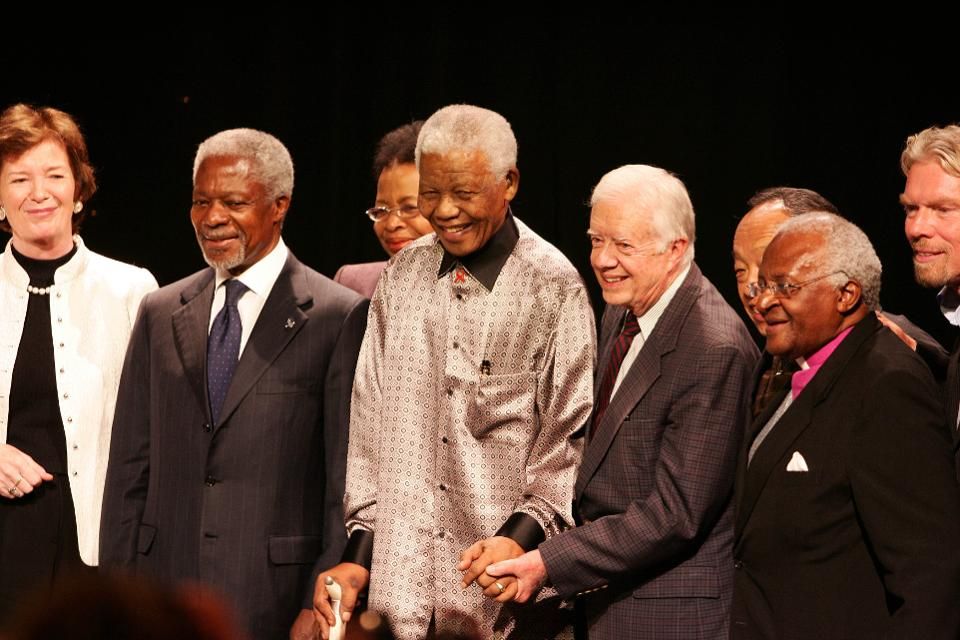 Desmond Tutu called Nelson Mandela a moral colossus and a global icon of forgiveness and reconciliation. Mandela taught us that change is almost always possible, even in the face of seemingly insurmountable odds, when gutsy leaders stand together, question the unquestionable and challenge the status quo.

There is no advantage in assuming that the world in which you live and work is stable and predictable. So, change is inevitable. Imagine the impact you could have if you applied these lessons.

What if there were a few more Madibas in the world?

In your own organization?

RISING OUT OF HARD TIMES